The development of plant organs is initiated from the meristematic cells. The organs above the root, like lateral organs, are initiated by the SAM (shoot apical meristem). The leaves, which regenerate from SAM, maintain the organogenic capacity in their margins. These cells, when induced in-vitro, give rise to whole plants. The process is known as organogenesis.

Organogenesis is defined as the development of organs, like roots, shoots, and flowers, either directly from an explant, or from the callus culture. The embryo is not considered an organ because of the absence of a vascular system and its independent existence.

There are three ways of organogenesis (by which adventitious organs form): (1) from the callus culture, (2) from an explant, and (3) from the axillary bud. The organogenesis by axillary bud development can be used to regenerate the whole plant from some types of tissue culture.

The process of organogenesis is affected by three factors: (a) the inoculum, (b) the medium, and (c) the environmental conditions. So, the process can be regulated by the components of media, the substances carried by the explant, and the endogenous compounds produced in culture.

In this article, the chemical regulation of organogenesis is discussed in brief. 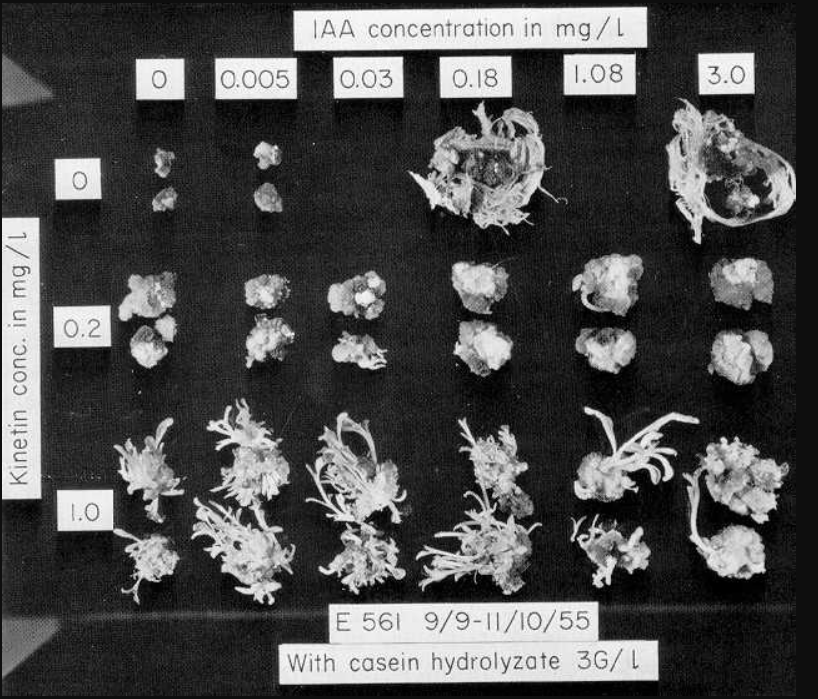 The formation of the root is observed at the higher concentration of auxin. The other factors that control the formation of the root in artichoke include: mineral salt, sugar, temperature, and light. It has also been observed that the addition of exogenous auxin in culture media inhibit the root formation. And later, many research studies showed that the endogenous auxin, cytokinin, is the determining factor of root initiation.

Some investigators have found the combination of phloroglucinol and indolebutyric acid is more effective in promoting the root initiation than auxin alone.

The process of shoot initiation is known as caulogenesis. It is induced by the optimal concentration of cytokinin in the media. In labs, a suitable balance of exogenous auxin : cytokinin ratio gives rise to the formation of shoots. When any of these growth regulators are omitted, it leads to the development of buds.

The initiation of callus development occurs when the auxin : cytokinin ratio is in the range of 10 to 100. The transfer of culture from callus inducing medium to shoot inducing medium is called “reversal transfer”.

In some monocot plants, higher cytokinin to auxin ratio is required to induce the shoot initiation. However, in some plants, only the omission of the auxin from the media results in the shoot development.

Some other compounds that can act as a substitute for the cytokinin in the culture media include purines, pyrimidines, and urea. The addition of adenine sulfate is very efficient in the shoot development or the induction of buds.

Why does the supplement of auxin: cytokinin fail to induce the shoot development in some species?

Some species may not show the shoot development even at the optimal auxin: cytokinin ratio. There can be three reasons for this:

What are the endogenous factors that may affect Organogenesis?

Organogenesis is a powerful technique to understand the mechanism of the action of hormones and other plant growth regulators, cell and tissue-type differentiation, initiation of the development of plant organs, and other molecular mechanisms of the plant.